A day of wrath is that day, A day of trouble and distress, A day of destruction and desolation, A day of darkness and gloom, A day of clouds and thick darkness, 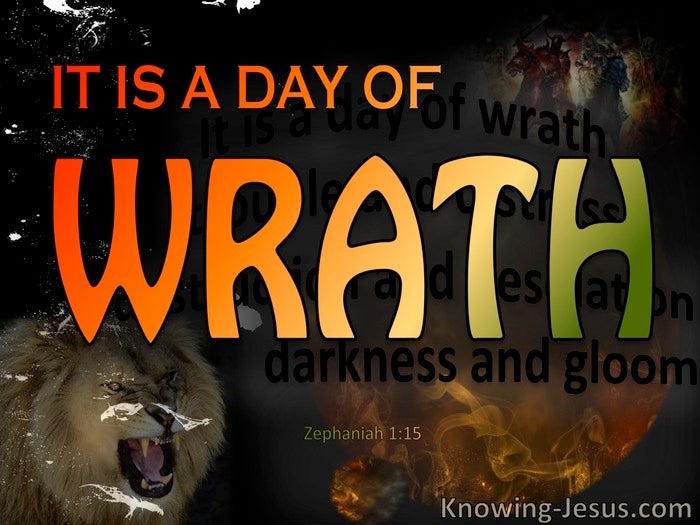 The Day of the Lord is a period of time that is often spoken about by Old Testament prophets, but when all the passages relating to this unique time in earth's history are carefully examined.. two very different descriptions of this special period emerge.

On the one hand, we see a time of great darkness and deep distress, when the full force of God's wrath is poured out on a God-rejecting, Christ-hating, sinful world. On the other hand, we discover a time of peace and prosperity, when Christ is ruling and reigning on a rejuvenated earth, where the wolf lies down with the lamb, and the earth is filled with the glory of God as the waters cover the sea.

On closer examination, we find that the Day of the Lord spans a “day', which lasts for 1007 years, when God Himself - in the Person of Jesus Christ, takes back the reign of authority from Satan, who became the renegade 'god of this world,' following Adam's fateful fall.

Satan is also called 'prince of the power of the air', and for the best part of 6000 years, mankind has been living in 'the day of Satan' - or 'the day of man'.. during which time, man has been subjugated under his demonically despotic rule. From the moment that man sinned in the garden, humanity has been enslaved under the authority of a fallen angel, during which time man has demonstrated his fallen nature, his sinful propensity, his lost status, his estrangement from God - and his desperate need of a Saviour - all of which resulted from Adam's sin in the garden of Eden.

And so we read, in Zephaniah, that the 'day' of man's rebellion, and Satan's deceptive rule will be replaced with the great and terrible Day of the Lord, which starts with a day of wrath and a day of trouble and distress. Jeremiah calls it 'the time of Jacob's Trouble', and it is also identified as Daniel's 70th week. In his short, but informative writings, Zephaniah warns that it is a day of destruction and desolation, a day of darkness and gloom, a day of clouds and thick darkness.

God is not only a God of mercy and goodness, grace and love.. but He is also a God of righteousness and justice, where sin must be punished, and His wrath must be poured out on a world, that deliberately disobeys His voice, rejects His offer of redemption and refuses His free-gift of Salvation - through the sacrifice of His only begotten Son.

Israel rejected the God of their fathers and broke their covenant with Him in the Old Testament, and were sent into captivity as a punishment. They rejected God the Son in the New Testament and crucified their Anointed King and heavenly Saviour - and through this Church age, which Paul calls 'the dispensation of grace', Israel will continue to be scattered across the face of the earth - until the Day of the Lord, when God will bring His chosen nation back to Himself.. during that first seven years of the Day of the Lord. Zephaniah describes this time as a day of wrath, a day of trouble and a day distress.. It is a day of destruction, desolation, darkness and gloom. The day of the Lord day will begin with clouds and thick darkness - but Israel will eventually call out to the God of their Father - and Jesus, their Messiah will come with clouds of great glory.

In that great and terrible day of the Lord, Israel will cry - 'blessed is He Who comes in the name of the Lord'. In that day, the Lord will return in the clouds - with great glory and majesty, and every eye will see Him. In that day, every tongue will confess that Jesus is Lord, to the honour of God the Father - and Christ will set up His 1000-year rule of peace and prosperity on earth. The rule of Satan will have ended, and Christ will begin his Millennial reign on earth. The day of the Lord which begins with God's wrath will continue for 1000 years under the authority of Jesus Christ, Son of God and King of Israel.

Heavenly Father, Your plans and purposes for humanity are amazing and we praise and thank You, that You did not leave us dead in our sins and enslaved to Satan in his despotic 'day'. Thank You, that You saved me from my sin by sending Jesus to be punished in my place and that He rose again to give me His life. Thank You that the wrath of God, which I justly deserve, was poured out on Christ instead of me. Open the eyes of many who remain lost in their sin and under God's condemnation.. while there is still time to escape the dreadful wrath that is to come - and we pray this in Jesus name, AMEN 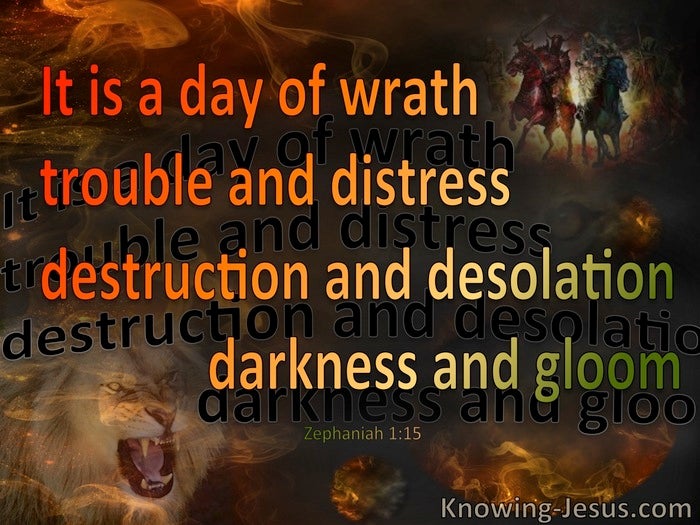 Choose a Verse from Zephaniah 1