'You shall not take vengeance, nor bear any grudge against the sons of your people, but you shall love your neighbor as yourself; I am the LORD. 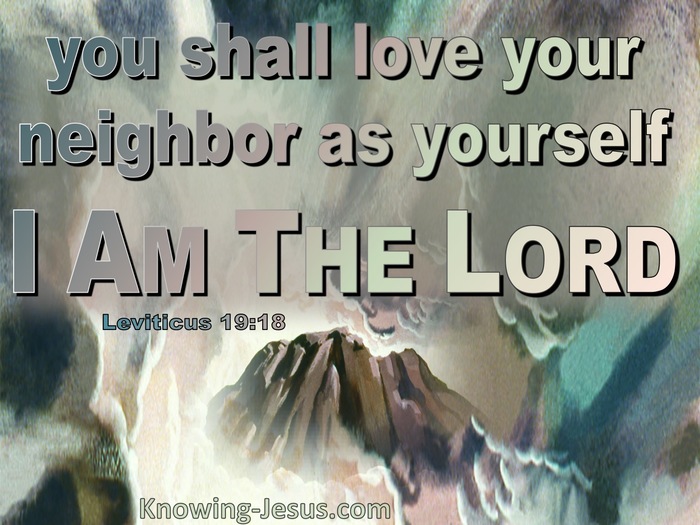 The Law of Moses not only instructed the Israelites on the ten moral commandments, with which we are all so familiar, but also the many other laws concerning the consecration of the priests and their duties; the feast days of the Lord and the five types of sacrifices. They included cleansing rituals and different food laws.. and the various rules and regulations concerning personal conduct in the everyday activities of life.

There were a wide range of laws connected with house and home, life and living, which touched on areas such as marriage and sexual purity; forbidden practices or individual rights; the growing and harvesting of crops and storage of food.. and many moral and ethical issues that simply expanded the familiar Ten Commandments. The entire Mosaic Law was indivisible - and breaking only one of the many lesser laws signified the breaking of the entire Mosaic covenant.

This law in Leviticus states: You shall not take vengeance, nor bear any grudge against the sons of your people, but you shall love your neighbor as yourself - I am the LORD. The focus of attention is on disagreements between neighbours and the grievances that can be built up between people with opposing interests or those who consider their rights have been violated.

It gives direct and straightforward instruction on taking revenge, when one's rights have been abused. You shall not take vengeance, nor bear any grudge against the sons of your people, is the clear directive from the Lord, but you shall love your neighbour as yourself. I am the LORD.  When this or any of the 613 laws of the covenant were broken the entire Mosaic Law was broken.

The people of Israel had been brought into a unique, covenant relationship with God. Indeed, they are the only nation that have ever been given this privilege – but great privileges come with added responsibility. They were to shun the practices of the surrounding nations on these issues and obey the word of the Lord. They were to be a witness to the pagan nations of the goodness of God and a light to the gentiles.

The people of Israel were to demonstrate to the rest of the world how the people of God were to live and behave. One of the ways that this was to be done was by NOT taking vengeance on a brother or bearing any grudge against any of the people of Israel. They were to love their neighbour as they loved themselves.

Avenging one’s rights and ‘taking the law into one’s own hand is the normal reaction of the “natural man” – the unsaved person. But God made it plain that vengeance belongs to Him. A standard was being introduced to the people of Israel that was not practiced in the surrounding, Gentile nations. But if the Law was given exclusively to Israel - how does this impact on the life of Christians?

Well, although Christians are not under the 'Mosaic Law' per se, we are certainly under 'the law of the Spirit of life in Christ Jesus', which James calls the royal law according to the Scripture, and there are many instructions that believers in the Church age are given on many of the issues that are addressed in the Law of Moses. e.g. vengence and justice belongs to the Lord.

Both Paul and the writer to the Hebrews reiterate an important principle to the Christian Church:- vengeance is Mine, says the Lord - I will repay. Just as Moses instructed the Israelite to leave the matter of reprisal and justice in God’s hands, so Christians in the Church-Age are also directed, in the New Testament to leave God to avenge us when we are wronged.

We are to trust Him when persecuted for righteousness sake, or when hated by the world for the sake of Christ – for as we read in Deuteronomy:- in due time the foot of the evil man will slip. A day of calamity is coming on all who are wicked, and their impending punishment is hastening upon them.

God’s instruction was clear to all His people – you shall not take vengeance, nor bear any grudge against the sons of your people, but INSTEAD you shall love your neighbour as yourself; I am the LORD. Loving one’s neighbour in the same way that we love and care for ourselves was an instruction Christ gave to Israel many times, during His earthly ministry and both Paul and James quoted this instruction in their respective writings to Christians.

Proverbs instructs us:  do not say, "I will repay evil". Wait for the LORD, and He will save you, while Peter voiced a similar theme when he wrote:- put aside all malice and all deceit and hypocrisy and envy and all slander.

The importance of loving our neighbour as ourselves is a principle that both the born-again believer and the unsaved man recognise as coming from the lips of Jesus – and is diametrically opposite to the reaction of the natural man in this fallen world. However, as member of Christ's Body – we have been given an even more astonishing (and impossible) commandment – that we love one another AS CHRIST LOVED US.

May we seek to fulfil this worthy directive in the sustaining and almighty power of the Holy Spirit of God – for without Him we can do nothing – but in His sufficient strength, we can demonstrate godly love to others in the same way that Christ loved US.

Heavenly Father, thank You for the Old Testament teachings and the many things that we can learn from Your Word. Teach me to take every thought captive to Christ when I feel that my rights are being violated or when I would like to take matters into my own hands. Thank You that through the indwelling power of the Holy Spirit, I am supplied with the sufficient grace to love others with Christ’s own perfect love - a love which passes my understanding. May I grow in grace and increase in holy love towards others, for Your greater glory - This I ask in Jesus name, AMEN. 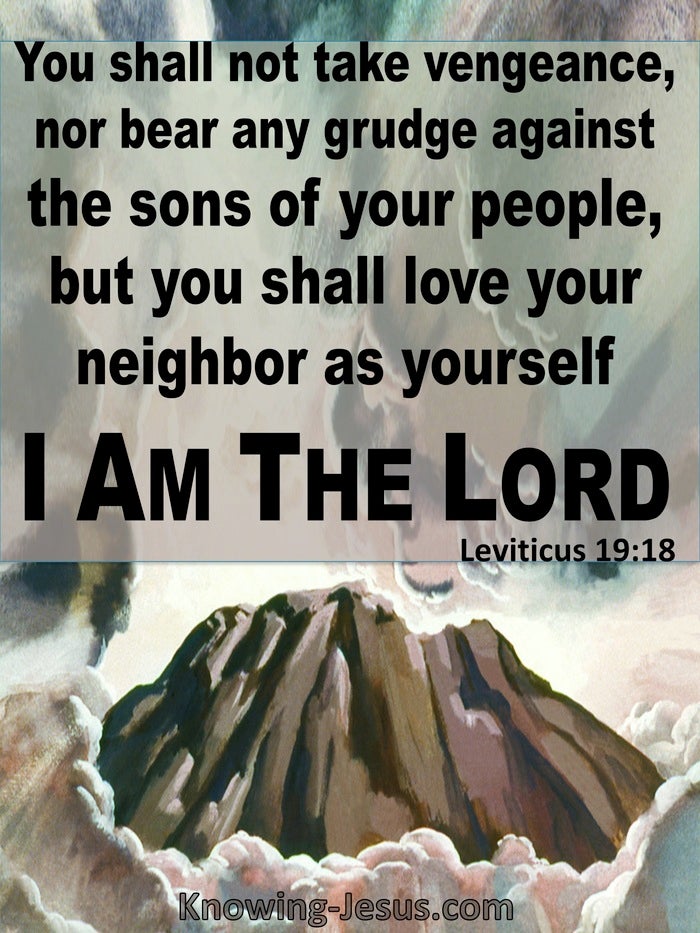 Choose a Verse from Leviticus 19