"You shall not add to the word which I am commanding you, nor take away from it, that you may keep the commandments of the LORD your God which I command you. 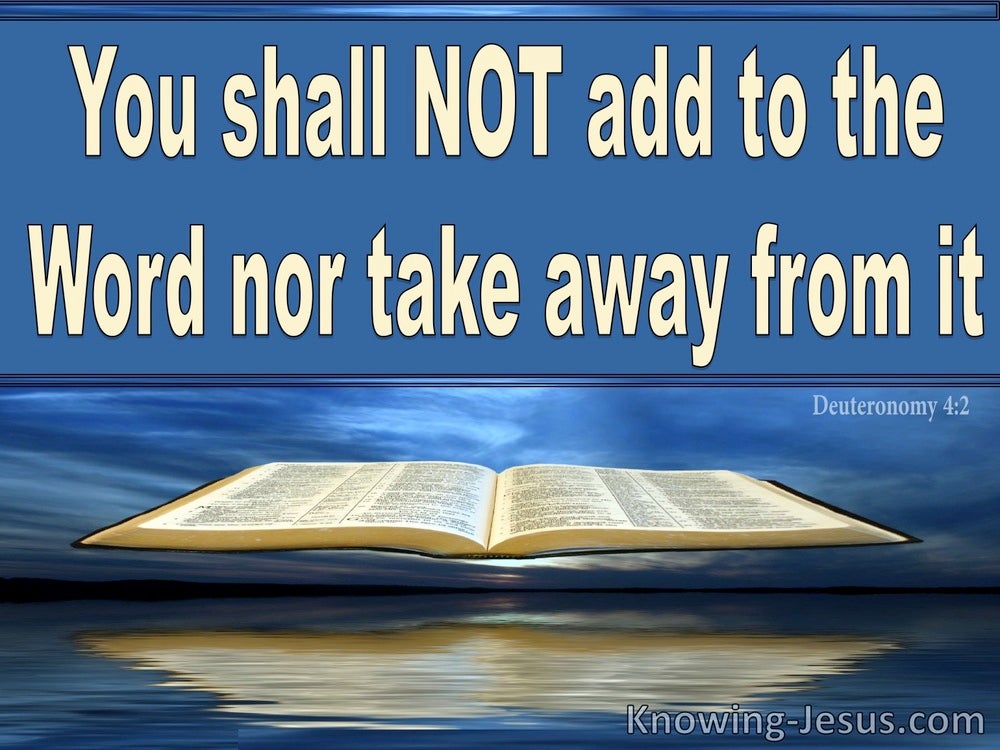 The children of Israel were rescued from enslavement in Egypt on that first Passover night, when they smeared the lintels of their houses with the blood of an unblemished Passover lamb, by faith. Because they believed God, the angel of death passed over them. They demonstrated their faith by carrying out His instructions and smearing the lintels of their houses with the shed blood of the Passover lambs.

It was not long after their redemption from their Egyptian slave-masters, that God made a conditional covenant with the nation of Israel. If they were to keep the terms of the agreement, God promised to bless them. However, if the nation broke its agreement with the Lord, they would be punished.

That first generation of Israelites, solemnly promised that they would do all that the Lord required. However, like us they had a sin nature and started to murmur against the Lord and His chosen servant, Moses. They displayed unbelief, dishonoured God with their idol worship, and even yearned to return to Egypt because they missed the cucumbers and garlic!

For forty years that first generation of Israelites was sentenced to wander about the wilderness, until every one of these disobedient people died, and their bones were buried in the desert sand. Only Joshua and Caleb entered the promised land, because they alone retained their trust and faith in the Word of the Lord, throughout the ordeal. Not only were Joshua and Caleb saved because of their faith, but they also lived their life by faith.

And so it was, that a new generation of Israelites grew up in the wilderness, and needed to be taught the same set of covenant rules their parents had despised. Moses called them together so that he could teach them the same statutes and judgments of the Law. The new generation, which was about to enter Canaan, and take possession of the land which the Lord God of their fathers had promised, were reminded of the sacred Law that was given to the parents a generation earlier.

But before Moses started to rehearse the terms of the agreement in the ears of the people, he gave them a serious warning. "You shall not add to the word which I am commanding you, nor shall you take away from it, that you may keep the commandments of the LORD your God, which I command you."

Israel had been selected out of the sea of humanity to be God's chosen people, whom He would use to circumnavigate Satan's evil plans to dethrone God. Having taken dominion of the earth from fallen Adam, this evil being desired to retain his illegal, satanic rule over the earth. But Israel were chosen to be God's witnesses on earth. They were to be an example to the Gentiles. They were to tell the nations about the Lord God of Israel. They were to teach them to put their trust in the one and only God of heaven and earth.

Israel was to explain about sin, righteousness, and judgement. They were to tell them about the coming Messiah, Who was to be Israel's King and the kinsman-Redeemer of all, who would trust in Him. They were to teach them the statutes and judgements of the Lord.. which He had given at Sinai. They were to tell of the coming Kingdom of God, BUT they were NOT to alter the Words of the Lord in any way. They were not to add to His Word, nor to subtract from it. "You shall not add to the word which I am commanding you," they were instructed, "nor shall you take away from it, that you may keep the commandments of the LORD your God which I command you."

God knows that a half-truth or part-truth can be equally deceptive as a full-blown lie. Adding to God's Word or removing sections of it can cause greater damage than ignorance of it. This is not only true of the Law of Moses, but is the case for all holy Scripture - and we should be diligent to know the truth of God's Word, zealous in maintaining its purity, rigorous in the study of the Scripture, and discerning in its correct interpretation.

Let us reject those that read their own biased opinions into God's Word or try to supplement it with extra-biblical text, dreams, visions, or wild imaginations, which seek to add to God's final revelation, and thus, enlarge the completed canon of Scripture. And let us seek out men of God, who are prepared to teach the whole council of God's Word, literally, historically, dispensationally, grammatically, prayerfully... and to teach it in its correct, biblical context.

Let us be like the Bereans of Paul's day, who were nobler than other Christians because they received the Word of God with all readiness of mind, and examined the Scriptures for themselves - searching through them every day, to see if what Paul told them was the truth.

Heavenly Father, thank You for Your Word and the truths that it contains. Lord, I know that throughout the history of the world, man has sought to discredit and distort biblical truth. Give me a teachable spirit and help me to read Your Word with wisdom and discernment. Provide teachers who do not distort the inspired text, through their own denominational biases or flawed understanding. Correct any biases I may have, and may Your Holy Spirit protect me from any half-truth or part-truths, that may distort my understanding, and guide me into all truth, I pray. In Jesus' name, AMEN. 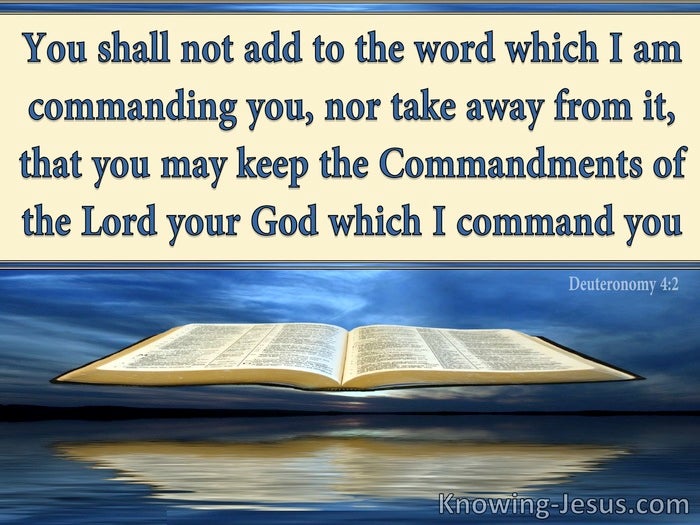 Choose a Verse from Deuteronomy 4

John 10:27
You Won't Reach It On Tiptoe
The Glue of Faith and Works - Man’s Nature and Destiny (3)
It All Points To Jesus