Everyone who competes in the games exercises self-control in all things They then do it to receive a perishable wreath, but we an imperishable. 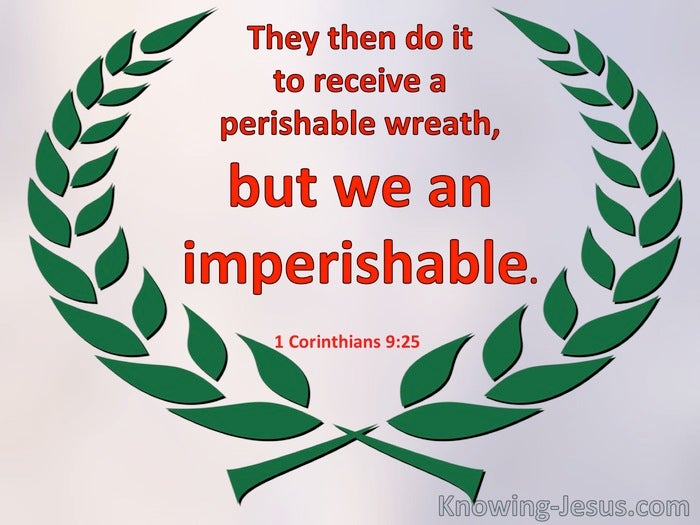 Paul's passion was to preach Christ to Jew and Gentile alike - Christ crucified and Christ risen from the dead. When he taught the Jews about the Lord Jesus, he approached it from a Jewish perspective. He used the Law of Moses, the writings of the prophets and Psalms to point his kinsmen to Christ and explain the truth of Who the Lord Jesus was and why He was the promised Messiah of God.

Similarly, when teaching non-Jews about the Lord Jesus, Paul used elements in every day, Gentile cultural to lead them to a deeper knowledge of the truth of the glorious gospel of God. He used examples from farming; the military; cooking and even the popular athletic games, when describing the need for patient endurance; spiritual protection; self-control and the need to grow in grace and in a knowledge of our Lord and Saviour, Jesus Christ.

Paul refused to engage in the kind of oratory skills and persuasive, philosophical arguments that were so popular at the time. He lived in such a way that he did not offend the Jews, by flaunting the liberty he had through faith in Christ, nor did he impose the legalistic restrictions of the Mosaic Law on the Gentiles - for we are not under law but under grace.

Salvation does not depend on keeping the Law but is a free gift of God's grace to whosoever will believe on the Lord Jesus Christ and Paul used every opportunity to share the truth of the gospel of grace, to Jew and Gentile alike. When teaching Jews, his message of redemption would begin with the Patriarchs, as he guided them through the Old Testament prophecies and psalms that pointed to Christ. When instructing Gentiles of the gospel, he would often begin by pointing to the God of Creation, the sinfulness of man, the need for forgiveness and God's plan of redemption through the death, burial and resurrection of His only begotten Son.

In this verse, Paul used the image of an athlete, and the mental and physical discipline that is required of each competitor, when participating in the popular Greek, Olympic games. He explained that, "everyone who competes in the games, must exercise self-control in all things". Athletes need to be disciplined in every areas of life, so that the best is not forfeited.

Everyone who participates in the punishing training programme described by Paul, must exercise self-control in all things. They need to maintain a strict diet; and be prepared to engage in a training schedule that pushes them to the peak of their mental and physical performance. "They do this", Paul reminds us, "to receive a perishable wreath".

Only one winner of the games is rewarded with a temporary, wreath of laurel leaves that will quickly fade; turn brown and be discarded. How very different from the imperishable reward that is the prize received by all who run the Christian race with patient-endurance - who press toward the goal of the upward call of God in Christ Jesus our Lord.

Every believer who disciplines themselves and exercises self-control for the sake of Christ are promised an imperishable, incorruptible crown, which will never ever fade away. Paul's great passion in life was to preach Christ to Jew and Gentile alike.

In the same way, our goal in life should be to meet others at their point of need and to share the truth of the gospel with whoever we come in contact. We should offer our lives as a living sacrifice and press on, so that we may gain the imperishable reward that is ours in Christ Jesus our Lord.

Heavenly Father, what an amazing testimony we see in the life of Paul, who demonstrated a disciplined life, that was spent preaching the glorious gospel of grace to Jew and Gentile alike. Thank You that all who live godly in Christ Jesus and exercise self-control in our Christian life are promised an imperishable crown, that will never fade away. Help me to press on for the upward call of God in Christ Jesus my Lord and help me to live and work for Your praise and glory - this I ask in Jesus' name, AMEN. 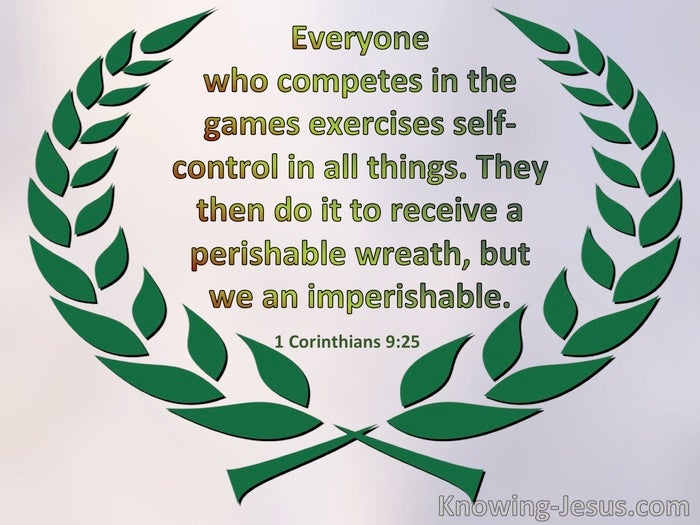 Choose a Verse from 1 Corinthians 9