the Lord grant to him to find mercy from the Lord on that day--and you know very well what services he rendered at Ephesus. 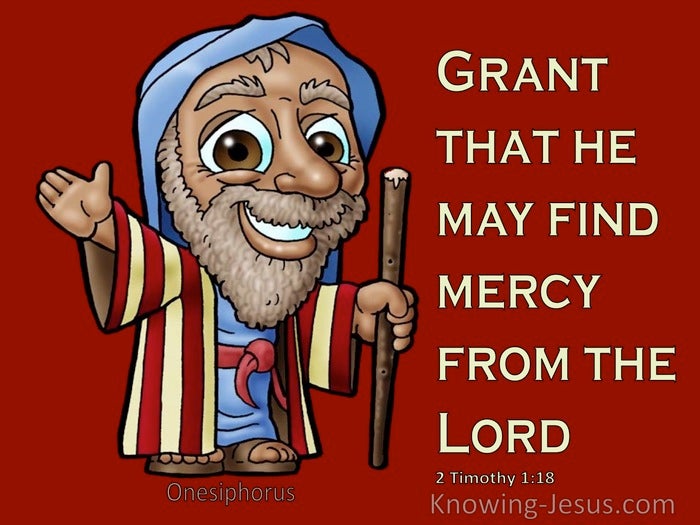 Being the last, identified letter of the apostle Paul, we can recognise an urgency in his message to Timothy, his trusted son in the faith and pastor to the Christians at Ephesus. It appears that Paul suffered greater hardship in this final imprisonment in Rome. In his earlier incarceration, the apostle appeared to enjoy a significant amount of freedom when he continued to receive encouragement and support from the believers in Rome as well as fellow-labourers in Christ, throughout Asia.

However, this final epistle of Paul, contains information about former Christian workers and mutual acquaintances, including Phygelus and Hermogenes, who had abandoned the apostle in his final hours. It is unlikely that 'ALL' fellow believers who "turned away from him" had deserted the gospel of Christ, but it was no doubt painful for Paul to feel so forsaken by trusted friends, in the twilight years of his ministry.

Paul knew that his faith was not vain and was able to confess that he knew the One in Whom he trusted and was persuaded that God was able to finish the good work He had started in His servant's life. Paul was shown, at the start of his ministry, all the things he would be required to suffer for Christ's sake, and he wanted Timothy to remain faithful to his calling in spite of the hardships he would also face.

Timothy had not abandoned Paul, like so many other Christian colleagues, so the apostle used this opportunity to encourage the younger man to remain faithful to his calling; to fan into flame his spiritual gift and never to be ashamed of the gospel he preached, for it is the power of God unto salvation to all who believe.

It also appears there was a man named Onesiphorus who also remained loyal to Paul, for he closed this first chapter with a beautiful prayer for this loyal friend... "May the Lord grant to him - Onesiphorus, to find mercy from the Lord - on that day". 'Onesiphorus' means 'bringer of help'  and it is believed that he and his family ministered to the apostle at a time of great need. Paul's fervent prayer gives witness to the love he had for this brother in Christ and the encouragement he also received from him.

When Paul prayed that Onesiphorus would find mercy from the Lord "on that day", he was referring to 'the Day of Christ', when Jesus will return in the clouds to remove His Church-age saints from the world, before the beginning of the great and terrible, 'Day of the Lord' - the 70th week of Daniel which is often called The Great Tribulation.

Paul also used his prayer for Onesiphorus as an encouragement to Timothy... to remain faithful during the difficult days they faced. Onesiphorus was obviously a mutual friend of Paul and Timothy.. for he finished his prayer saying to Timothy, "...and you know very well what services Onesiphorus rendered at Ephesus".

We do not know what encouragement this man gave Paul or what service he rendered in Ephesus, but we do know that he was a faithful brother in Christ, who had provided Paul with help and encouragement in the past. And in his lonely cell, as he awaited his execution, we are blessed to hear about Onesiphorus.. his gracious ministry to the apostle and his faithful service to the Lord.

Faithfulness to the Lord and fidelity to fellow believers is one of the messages that Paul wanted to instil in Timothy, and it is a message that every one of Christ's body needs to learn and live-out in these closing days of the Church age.

May we give encouragement to the saints and be a faithful servant of our heavenly Lord in our own sphere of life, and may we honour Him in the lives we live... as did the testimony of these three men in their various ministries - Paul the apostle, Timothy the pastor and Onesiphorus - the 'Bringer of Help'.

Heavenly Father, thank You that Your word gives witness to the testimony of many men and women, who were faithful in the work You gave them to do. We thank You for the ministry of Paul and the wonderful Scriptures he penned for our learning. We thank You for Timothy, the pastor whose life was such a wonderful demonstration of a young man who was faithful to his calling. And we thank You for servants like Onesiphorus, who brought comfort and encouragement to others. I pray that I would remain faithful to the work that You have given me to do. May I not desire honour or validation from others, but only do what is righteous in Your sight..  for Your greater praise and glory - this I ask in Jesus' name. AMEN. 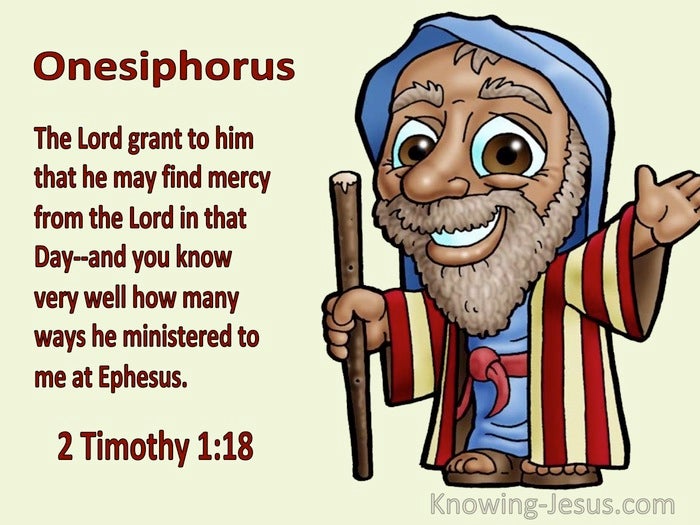 Choose a Verse from 2 Timothy 1

Unity Of Design
The Destitution Of Service
God, My Courage (Study In God - All I Need-11)
His Righteousness – My Glorious Garment