When it was evening, there came a rich man from Arimathea, named Joseph, who himself had also become a disciple of Jesus. 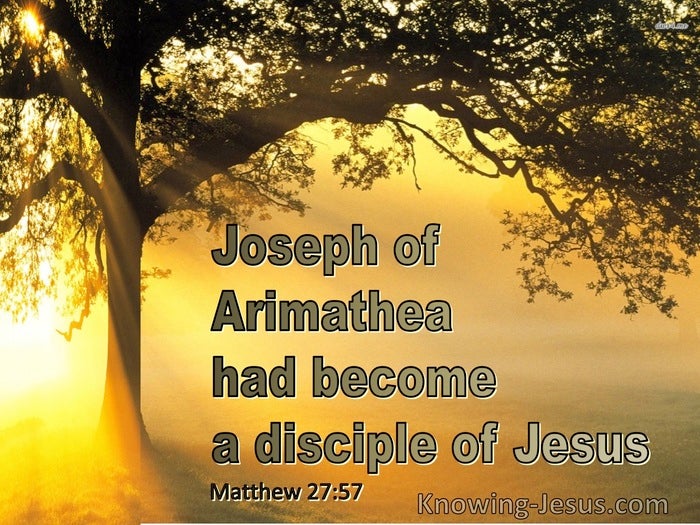 Matthew 27 traces Christ's path from his trial before the Roman authorities to his brutal crucifixion, as a common criminal on Calvary's cross and His burial, in the tomb of Joseph of Arimathea. Along the way we are shocked to discover that Pilate released Barabbas instead of Jesus, to appease the crowd... who refused to recognise Him as the rightful King of Israel. He was the anointed Son of the Father, and was sent to save His people from their sin, but was despised, rejected, mocked and delivered up to be crucified.

The bodies of those crucified were generally left exposed to the elements and allowed to rot. However, following His sacrificial death on the cross, for the sin of the world, the Father would not allow His beloved Son further abuse from godless men, but arranged for His burial in the newly-hewn rock-tomb of a wealthy man, for we read 'when it was evening, there came a rich man from Arimathea, named Joseph, who himself had also become a disciple of Jesus".

Joseph, a prosperous man, was a member of the Sanhedrin... the religious authority who consented to Jesus' death. We read elsewhere that he was an honourable counsellor who was waiting for the reign of God, and he questioned the biased behaviour of the Jewish Counsel and would not concur with their decision to crucify an innocent man.

This secret disciple was part of a remnant that was looking for the consolation of Israel, and no doubt as he studied the Scriptures, he discovered that Jesus was indeed God's promised Messiah. He may have been a clandestine follower before the cross, but we read in Mark that "he came boldly to Pilate, to ask for the body of Jesus for burial" - and his request was granted.

Joseph's actions fulfilled the prophecy of Isaiah, "His grave was assigned to be with wicked men, yet with a rich man in His death." The death of Christ was indeed honourable... for he died that we might be saved...and it was also linked with both lawless men and those who were wealthy and honourable, as foretold centuries before.

Christ's sacrificial death was a vital part of God glorious plan of redemption. He was to DIE to pay the price for the sin of the world and He was to RISE from the dead to break the power of Satan, sin, death and hell - and He died to bring many sons to glory.

Before His death, godless men were permitted to carry out the most atrocious acts against the Lord of glory, but after His death, it was only the hands of faithful followers, like Joseph of Arimathea and his friend Nicodemus, who came to Jesus at night... who handled the body of our Lord, as they wrapped Him in a linin sheet and laid Him in the prepared tomb.

Christ was crucified on the Feast of Passover, and under Jewish law, handling a dead body would render these men unclean and exclude them from participating in this annual ceremony, instigated by Moses. However, these two emboldened believers had already been born-again of the Spirit and received forgiveness of their sin from the true Passover Lamb - the Lamb of God, who takes away the sin of the world.

Heavenly Father, thank You for the encouragement we receive from the courageous actions of Joseph of Arimathea and his friend Nicodemus, who were not ashamed of the gospel of Christ, but fulfilled Your plans and purposes by boldly asking to take Christ's lifeless body for burial, in a prepared tomb. Thank You that there is no-one excluded from Your gift of salvation - from the thief on the cross to these two members of the immoral Sanhedrin, who believed God's word and fulfilled Scriptures by their actions. I pray that I may live the rest of my life to Your praise and glory and that I finish the work You have prepared for me to do. This I ask in Jesus' name AMEN. 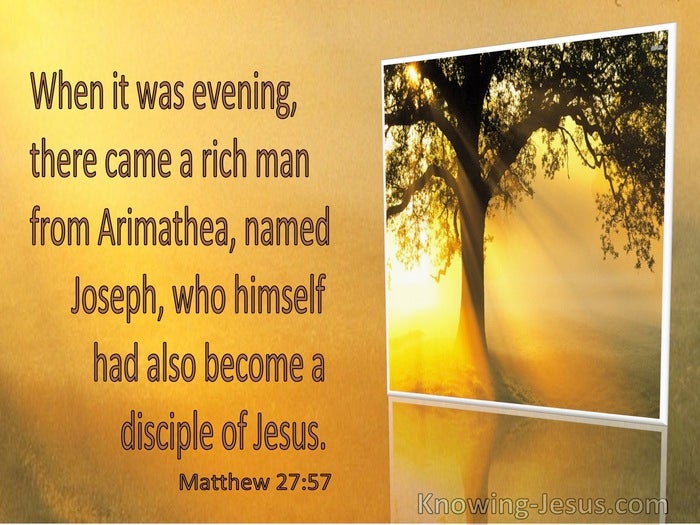 Choose a Verse from Matthew 27 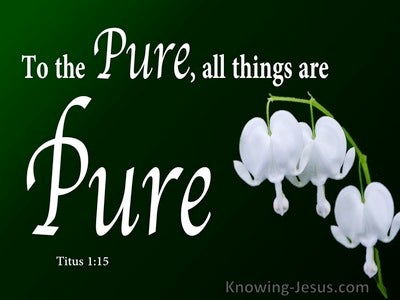 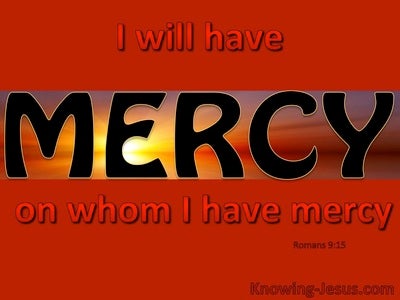