Satan answered the LORD and said, "Skin for skin! Yes, all that a man has he will give for his life. 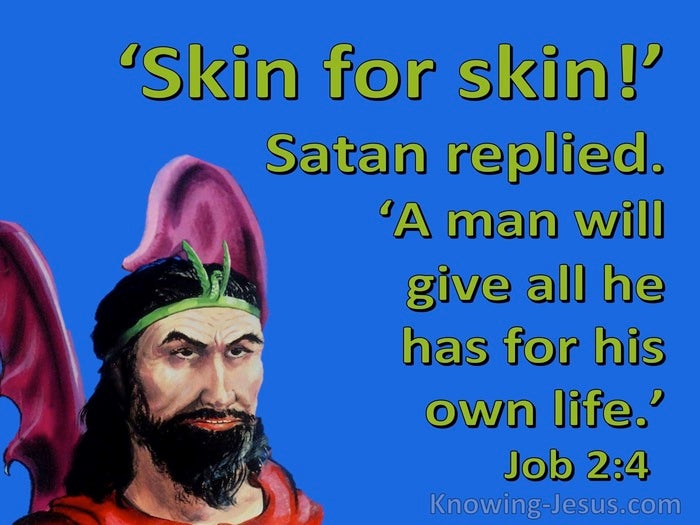 Picture courtesy of The Glory Story

Satan had done his worst to God's servant Job in his attempt to get him to deny the goodness of God and curse the Lord to His face. This afflicted man had lost all his worldly wealth; his ten adult children; his wife's respect and the esteem he enjoyed from the local community... nevertheless, his faith in God never faltered and he was able to say, 'Naked I came from my mother's womb, and naked I shall return there. The Lord gave and the Lord has taken away. Blessed be the name of the Lord'. Satan had used the full extent of his devilish power to confound this man of God, but every attempt had failed.

Following Job's traumatic test, Satan continued to roam about the earth, as before, and then another day came when the sons of God came to present themselves before the Lord, and Satan also came among them to present himself. Although a fallen angel, Satan was still required to report his activities to God, and he reveals that he had been roaming on the earth and walking around on it.

Job had passed the test faultlessly. He had blessed the Lord despite his pain and retained his godly principles. Once again, the Lord challenged Satan to consider the integrity and faith of his servant Job, "for there is no one like him on the earth, a blameless and upright man fearing God and turning away from evil. And he still holds fast his integrity, although you incited Me against him to ruin him without cause".

God's analysis of the facts were true, but Satan would not acknowledge his defeat. This foul fiend would not accept the outcome and even argued with God that Job's declaration of faith was false. Satan implied that the only thing that Job desired was his own life - 'his skin'. He implied that the man was perfectly willing to sacrifice the lives of his ten children.. his land and his wealth, as long as he remained alive -"Skin for skin!" was his cruel accusation, "Yes, all that a man has he will give for his life".

Satan's charge against God remained, as did his insistence that Job retained his integrity and served God because he was highly favoured by the Lord.. not out of love for Him. He implied the test was unfair because Job's life - his "skin" was kept intact. "Skin for skin!" Satan mocked, "Yes, all that a man has he will give for his life... however," he added viciously, "put forth Your hand now, and touch his bone and his flesh and he will curse You to Your face." and so the Lord said to Satan, "Behold, he is in your power, only spare his life."

Just as Satan falsely accused Job and even made blasphemous accusations against our righteous God, he has accused the people of God down through millennia of time and continues to be the accuser of the saints today. However, his ability is restricted for Satan is unable to do anything to us without God's permission.. for the Lord places certain limitations on the evil he is permitted to perform.

God knows everything that affects his people. His desire for each one of us is that we grow in grace, mature in the faith; hold fast to the truth and prosper in all we do, but there are times when the enemy is permitted to test us, and cause our faith to be severely challenged.. just as he tested Job and the apostle Paul, and sifted Peter like chaff - but Jesus is our great High Priest Who ever lives to intercede on our behalf, when Satan makes his cruel accusations.

Just as in the days of Job, the devil continues to act like as a roaring lion, walking up and down on the earth and going to and fro.. seeking whom he may devour, for he is still the accuser of the saints - and we are called to be sober and vigilant and to resist him by standing firm in the faith.. as did Job, and to equip ourselves with the full armour of God, when the enemy seeks to overwhelm us.

May we all stand firm therefore, having girded our loins with truth, and having put on the breastplate of righteousness, and having shod our feet with the preparation of the gospel of peace. In addition, may we all, take up the shield of faith with which we will be able to extinguish all the flaming arrows of the evil one. And let us put on the helmet of salvation and take hold of the sword of the Spirit, which is the word of God - and pray, with all prayer and petition - at all times in the Spirit.

Heavenly Father, thank You for the many examples of men of faith who resisted the devil and stood firm in the evil day. I pray that like Job, Paul, Peter and others I too would stand firm in the truth of the gospel of God and trust in Your unfailing love. Thank You that we have been equipped with the whole armour of God and that His grace is sufficient to deal with all the fiery darts of the evil one. Thank You for my position in Christ and I pray that I would live and work to honour Your name, AMEN. 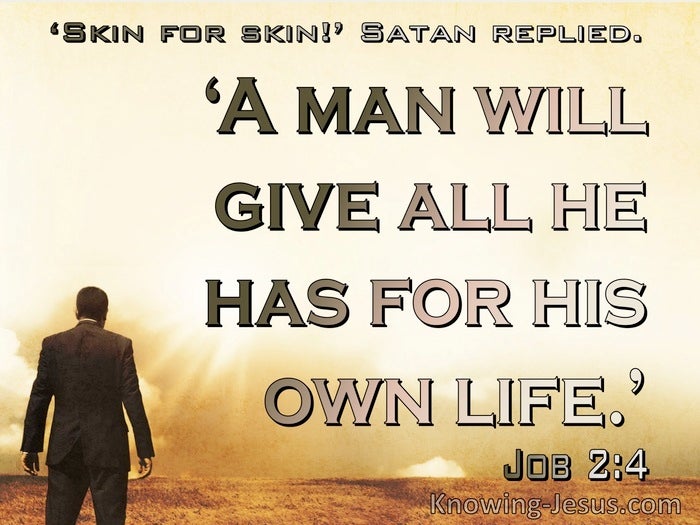 Choose a Verse from Job 2

Safe Beyond Question
The Initiative Against Dreaming
God, My Friend (God - All I Need-6)
Wait Patiently Wait