"Go up to the mountains, bring wood and rebuild the temple, that I may be pleased with it and be glorified," says the LORD. 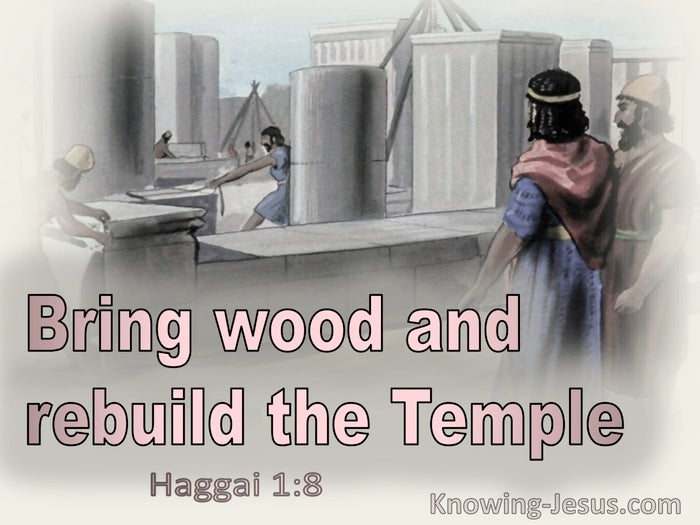 Haggai's brief prophetic ministry had an immense effect on the post-captivity people of Israel. Haggai returned to the land, when the first wave of returnees, led by Zerubbabel, came back from Babylon. His simple message was, 'Get busy and rebuild the Temple of God,' and his short book outlines four directives from the Lord to His people.

The remnant that returned to their homeland had shown little interest in rebuilding the Lord's Temple, as decreed by Cyrus the Great. Although they were living comfortably in their own well-constructed, panelled houses, they showed no interest in renovating the burned-out ruins of the Temple, reestablishing the rites and rituals required by the Mosaic Law or participating in the feasts and festivals the Law demanded.

Without taking part in the feasts, festivals, sacrifices and Sabbaths, instituted by God, the people could not fulfil the Mosaic Law, so that atonement could be made for their sin, which God demanded from His people, Israel. God had made it clear that they would be blessed if they honoured the covenant they made with Him, but would be severely judged, through famine and drought, if they continued to disobey His word.

Haggai's first 'word' from the Lord expressed displeasure that the people, who had laboured to build their own houses, neglected the rebuilding of the Temple of God. The people were called to "consider your ways!" and Haggai explained that their meagre harvest and poor economy was the result of neglecting their covenant promises to God.

Within the month.. the governor, the high priest and the people obediently started to work on rebuilding the Temple. However, they were soon discouraged, when they recalled the magnificence of Solomon's Temple and realised a new-building could never equal its former glory. Soon these disheartened workers were once again called to "consider your ways!"  and this time Haggai prophesied, "Go up the mountains. Bring wood and rebuild the temple, that I may be pleased with it and be glorified, says the LORD".

The people were reminded that their poor harvests and economic decline resulted from their own, foolish neglect and that until they did what was right in the eyes of the Lord, He would continue to chasten His people and withhold the dew that watered the earth. "I called for a drought on the land and on the mountains", they were reminded. "on the grain, on the new wine, on the oil, on what the ground produces, on men, on cattle, and on all the labour of your hands."

Israel were the people of God, Who were promised blessings if they obeyed His Law, but curses if they transgressed His commands... and due to disobedience, these returnees had to be punished. A Father chastens the one He loves and Israel was disciplined, following their return from Babylon, because they were careless about rebuilding the Temple... so the Mosaic Law could be reinstated.

Members of the Church are also God's beloved, blood-bought children and although we are not under the Mosaic Law, nor required to sacrifice in the Temple or keep the feasts of the Lord, we are called to be obedient to His Word. We are to be workmen who are approved unto God. We are to be those who live by faith and not by sight. We are to grow in grace, walk in newness of life, live in willing submission to the indwelling Holy Spirit and love as Christ loved us, which can ONLY be carried out when we remain in fellowship with Him.

We are not required to keep the feasts, offer sacrifices to God or rebuild the Temple with wood from the mountains to glorify the Lord. We are to glorify the Lord by living godly lives, and abiding in Christ.. because we ourselves have become God's holy residence. We are living stones that are being built-up into a spiritual house. We are the Body of Christ and we have become a holy priesthood and ministers of reconciliation, and we are to offer ourselves to God as a spiritual sacrifice... holy and acceptable to Him, through Jesus Christ our Lord.

The book of Haggai, together with all Old Testament writings is God-breathed and written for our learning. Like all Scripture, it is given by inspiration of God and is profitable for instruction, for reproof, for the conviction of sin, the correction of error and as a discipline in obedience. The word of God is living and active and able to train us in righteousness and guide us into all truth. It is designed to conform us into the likeness of Christ and instructs us in fulfilling God's will, in thought, purpose, and action. But although Haggai was written FOR our learning, it was not addressed TO the Church. The book of Haggai is a part of Scripture that was written specifically TO Israel - FOR our learning.

There is so much that we can learn from the book of Haggai. It reminds us of the importance to carry out God's will for our life and the need to keep the eyes of our heart on Jesus. It reminds us that God will chasten His children if we fail to do those things that are pleasing in His sight. It reminds us that we should not put off important spiritual duties and that there are consequences when we fail to do what is right in God's eyes.

May we be ready and willing to learn the lessons that God would teach us as we read His Word with open eyes, a teachable spirit and a heart that is ready to listen to His voice and delights to do His will

Heavenly Father, thank You for prophets like Haggai. May we learn from Israel's mistakes and seek to do only those things that honour Your holy name. Thank You that we do not live under the Law but in the dispensation of Grace. Thank You that we do not have to rebuild the Temple, offer animal sacrifices or keep special feast days in order to worship You. May I fulfil Your will for my life in the way I live, by only doing those things that honour Your name, and by offering myself as a living sacrifice, holy and acceptable to You.. in thought, word, deed and the motives behind all I do. This I ask in Jesus' name and for His greater glory, AMEN. 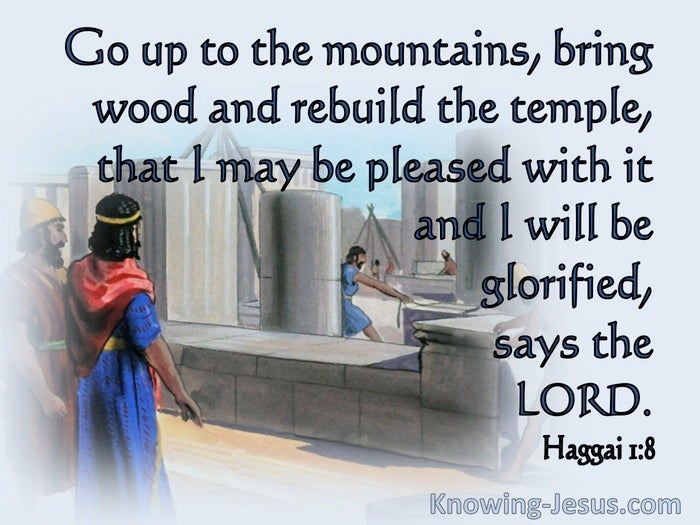 Choose a Verse from Haggai 1

Safe Beyond Question
The Initiative Against Dreaming
God, My Friend (God - All I Need-6)
Wait Patiently Wait