But these people, like irrational animals-creatures of instinct born to be caught and destroyed-speak blasphemies about things they don't understand, and in their destruction they too will be destroyed, 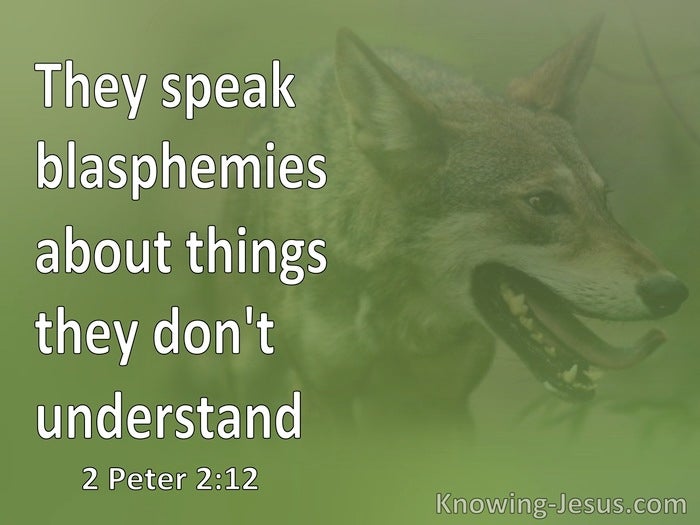 Like his first epistle, an important element of second Peter is to remind his readers of the fundamentals of our faith; establish believers in the truth and feed the flock of Christ, while addressing issues such as suffering; false teachings and standing firm in the sufficiency of God's grace.

Although there are many similarities between the two epistles we see a greater urgency in his second letter, to build on his earlier warning of false teachers; to insist his readers are rooted and grounded in Scripture and to warn of the many dangers the Church will have to address in the days ahead.

Whereas his first epistle concentrated on God's grace and our great salvation; our priestly calling; living a life of holiness and carrying out our Christian responsibility, he spends considerable time, in his second letter, warning of the devastating influence of false teachers and exhorting us to watch out for their destructive heresies - while urging us to grow in grace and to develop a sound knowledge of the Lord Jesus as we press towards spiritual maturity.

In this passage Peter describes the increasingly arrogant characteristics of false teachers, and reassures believers that these deceivers will be severely judged for their deceit and sinfulness. They display a blatant disregard for the true gospel and have a tendency towards serious sexual immorality.. and shamelessly displayed it openly. Peter describes such people as abominable individuals.

He not only compares them with the men of Sodom and Gomorrah but also the rebellious angels who sinned with Satan, and are kept in chains of darkness, until judgment day. He describes them as "irrational animals" or "brute beasts", who expose their gross ignorance by speaking blasphemies about things they don't understand".

Peter compares the apostate religious leaders in this verse with irrational animals, whose are devoid of reason and governed by their instincts rather than being led by the truth of God’s word. Their lack of scriptural understanding causes devastation in the lives of others, and inflicts great damage to the gospel. Such teachers should not be ignored or accommodated, but need to be exposed and their teachings demolished.

Peter explained that the 'authoritative' teaching these dangerous people spew out to their captive audiences is nothing more than "their own logic and reasoning". Their teaching is not based on the Bible but is a false gospel, designed to feed their ungodly and promiscuous appetites, which secures their own downfall but tragically leads many people astray.

He sees these false teachers as a blemish or unsightly stain, that needs to be removed from the church, for they give an appearance of godliness while denying the Lord Who bought them. They not only infect many with their diseased teaching but prevent unbelievers from finding the truth.

We are also informed "they speak blasphemies about things they don't understand". We are not told about the nature of the blasphemies they teach... whether their blasphemy is against the Most High God, the angelic realms, God's people or the holy Scriptures, Peter makes it clear it must not be tolerated and will eventually receive the most intense judgement from God.

We live in a time when false teachers continue to disfigure the church and blaspheme God with their unscriptural teaching and licentiousness, but their destruction will eventually take place. We however must make sure we are rooted and grounded in the essentials of Scripture, and be ready and willing to identify and expose false teachers - for by their fruit you will know them, and through a knowledge of Scripture you will be equipped to identify and challenge them.

Heavenly Father, thank You for the many warnings of false teachers who cause such devastation in the Church. Thank You that the true gospel is contained in the Scriptures and I pray that in Your grace I would become fully equipped to identify false teachings and other deceptions in the Church. Help me to be ready to give a clear and accurate answer for the hope I have in me and protect the hearts and minds of all Your people from worldly deception. We pray that false teachers would be exposed for their trickery and their deceptive ministries be brought to justice - this I ask in Jesus' name, AMEN. 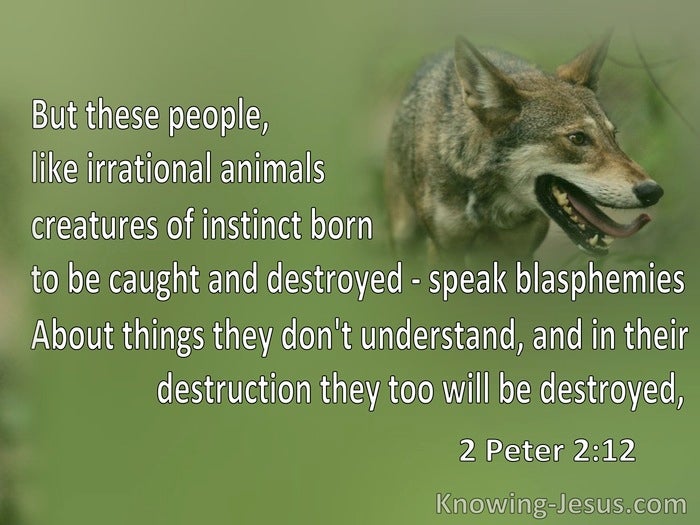 Choose a Verse from 2 Peter 2